Catherine Randall was brought up in Shropshire but has lived in London since graduating from St Catherine’s College, Oxford with a degree in Modern History. She worked as an editor in book publishing before taking a break to bring up her family. Having always particularly loved children’s books, Catherine took a Masters in Children’s Literature at the University of Roehampton and realised that what she really wanted to do was write her own children’s books, although she still enjoys editing other people’s books on a freelance basis. Her debut novel, The White Phoenix, an historical novel for 9-12 year olds, was published in August 2020.

As a result of the research she undertook while writing The White Phoenix, Catherine regularly takes a workshop about the Great Fire of London into local primary schools. She is passionate about encouraging children’s reading, and for several years has volunteered with the charity Prisoners Reading Groups (PRG) at HMP Wandsworth, where books are given to all visiting children on their regular Family Days. Catherine also worked on a PRG programme to encourage prisoners to engage with their children through books and reading. She loves working with children and has had a great deal of experience leading children’s groups of all ages at her local church.

Catherine has also completed a playwriting course at the Rose Theatre, Kingston-upon-Thames, and has written and produced two highly acclaimed local history plays. ‘The Teddington Review’, a ‘light-hearted romp through 800 years of Teddington history’, was performed in 2017 in the Grade II listed Normansfield Theatre, a spectacular Victorian theatre which still retains its original scenery. ‘Letters from the Front’ was written for the centenary of Armistice Day 1918 and was performed to a packed audience in the Landmark Arts Centre, Teddington on Remembrance Sunday 2018.

She is currently working on her second children’s historical novel, set in Victorian London. 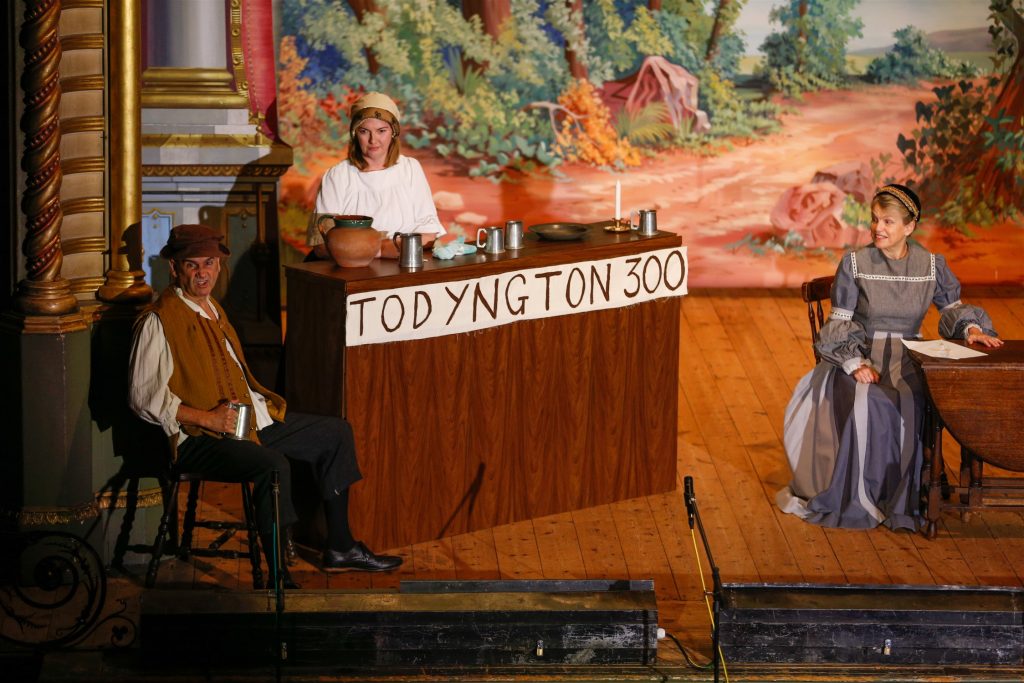 A chat with fellow writer Gail Aldwin, first published on Gail’s blog ‘The Writer is a Lonely Hunter’ 28 August 2020.

Catherine, can you start by telling us where your writing journey began?

My writing journey began when I was a six-year-old living in Lincolnshire and I wrote my first ‘book’, unpromisingly titled, ‘Catherine, Lucy and the Goat’. We moved to Shropshire when I was seven, and I continued to write ‘books’, mostly thinly disguised imitations of Arthur Ransome’s Swallows and Amazons series, with a few Victorian melodramas thrown in. When I grew up I tried my hand at adult short stories, but realised quite quickly that my heart was in children’s books. The books I read as a child remain the ones that resonate most deeply with me, and now I love reading new children’s books, partly as research, and partly just because they’re a great read.

What inspired you to write The White Phoenix?

Like lots of children, I’ve been fascinated by the Great Fire of London ever since I was a child. When I visited London from Shropshire at the age of ten, the first thing I wanted to see was the Monument to the Fire. When I moved to London in my early twenties, I loved walking round the City, with its ancient churches and old street names dotted among the modern glass and steel buildings. Much later, at a time when I was looking for a subject for a story, I caught part of a radio programme about the rebuilding of London after the Great Fire, and it reawakened my interest. When I started researching I discovered that London in 1666 was a great setting for a novel, not just because of the Fire but because of all the other things that were going on – war, fear of invasion, the plague, as well as all the prophecies swirling round London about the year 1666. I was initially going to write about St Paul’s, but then I realised it would be more fun to write about the many bookshops that clustered round the cathedral, especially as it was possible for a woman and her daughter to run a bookshop by themselves.

I started writing some time ago, but many of the themes in the book have turned out to have more resonance today than I could ever have imagined.

What are the challenges of publishing your first book during a pandemic?

The first thing to say is that I was absolutely delighted to have the book published, and the thought of publication has been a beacon of light in what has been a tough year both generally and personally. However, there’s no denying that there are significant challenges. I think the worst thing is that I’ve not been able to do any events with children at bookshops, libraries or schools.

And of course I can’t help being sad that I wasn’t able to have a proper launch party, because there are so many people who have shared in this journey with me and whom I would like to thank. However, I did manage instead to have a series of very small parties, when small gatherings were allowed, so that was fun.

Who is the ideal reader for The White Phoenix?

I really hope that children aged from about 9 to 12 or 13 will enjoy it. I suppose it is a cliché to say so, but I have written the sort of book that I would have liked to read at that age. However, I also know that quite a few adults have read and enjoyed it, so that’s very gratifying.

Is there a message in the novel that you want young readers to grasp?

Lizzie, the main protagonist in the book, refuses to give in to the prejudice of other people around her and makes friends with a Catholic girl at a time when Catholics were very much considered the enemy. I hope that young readers will take away the message that they should never let others tell them what type of people they can or can’t be friends with.

I also hope that young readers grasp the message that you should stand up for what you believe in, which is what Lizzie tries to do, though not always successfully.

Which children’s authors have influenced you?

From my own childhood – Gillian Avery who wrote wonderful, vivid stories about Victorian children such as The Greatest Gresham;  Penelope Farmer who wrote my all-time favourite children’s book, the time-slip story Charlotte Sometimes; and K.M.Peyton, author of the Flambards books among many others. I had the privilege of meeting her once and she was so lovely.

More recent writers who have influenced me include Eva Ibbotson, Hilary McKay (I just love her family stories) and Lydia Syson, who has written some terrific historical novels for teenagers, as well as the wonderful Katharine Rundell and Emma Carroll, both of whom are a great inspiration.

I am discovering new children’s authors all the time, and they all have an influence.